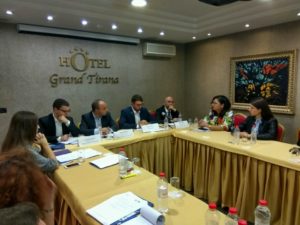 Under the framework of the project: “Monitoring Chapters 23 & 24 of Albanian EU accession through lenses of civil society” supported by Konrad-Adenauer- Stiftung, Rule of Law Program South East Europe (RLP SEE), European Movement Albania organized in Tirana on 23 October 2017, the informative activity in which the involved experts presented their respective Monitoring Reports.

Mr. Florian Xhafa and Ms. Holta Ymeri presented during the activity the current stage of reforms in reference to recommendations and directives, and level of policy implementation, legislative gaps existing and created as well as the role and contribution of different institutional actors to the main priorities addressed in Chapter 23 and 24, considering the developments and the situation in 2017. Some of the themes affected by the monitoring reports: i) judicial reform; ii) the fight against corruption; iii) judicial cooperation in civil matters; iv) violent extremism and radicalism; v) migration policies vi) cyber-crime.

Ms. Holta Ymeri, Editor in Chief of Albanian Law Journal acknowledged the progress that is aimed through the reform, but envisaged problematic situations that have been created throughout this transitory phase for the comprehensive set of measures that are under way. The fight against corruption and the vetting process are also seen in an important light when related to the necessary advised measures from the earlier progress reports. Such discussion provoked constructive debate with the participants that underlined the problems that inadequate infrastructure and limited staff poses to the judiciary, and questions that followed regarding the possibility of building an independent and impartial judiciary.

Mr. Florian Xhafa whose topic of expertise include the legal expertise of Chapter 24 tackled the issues of cooperation of judiciary in matters of civil law, fights against violent extremist and terrorism, cyber security and migration within the framework of Albanian integration process. Even though most of the attention is concentrated to the matters of judicial reformation, still such technical matters hold a primal importance in the functioning of rule of law in a society that aims to increase and further depth the links, let them be financial or private, with the member states of the union. One of the main suggestions proposed is the abolition of the exequatur procedures that over-complicate the resolvance of intra-regional competence cases. Judges training was also proposed, with the aim to increase the efficiency contributions of officials to the system. Detailed studies over the experience and expertise development in Albania are considered to be a requisite, and should not be seen as divisible from the justice reform in its core procedures. Such lecture, for its relevance provoked a lot of discussions, with questions ranging from the probable causes of extremism, to the prospect of migrant waves in the future.

After each presentation there were insights given from other involved experts. Mr. Periand Teta a renowned legal expert shared the significant findings related to Judicial and Fundamental Rights aspect. In here, a significant attention was dedicated to the Justice Reform, a process now in progress among Albanian Institutions with the aim to equilibrate and guarantee an adequate quality of rule of law in the country.

Dr. Dorina Ndreka, lecturer of the private international law, whose topic of expertise included the intra-regional cooperation of judiciary in matters of civil law within the framework of Albanian integration process. She stated the importance of moving from strategic planning to concrete action from the competent institutions, as well as better coordination of these law-enforcement and judiciary institutions among themselves and the international partners.

Coming from a security background, Mr. Redion Qiriazi analyzed in details the security challenges posed to Albania due to geo-strategic dynamics of the recent times, as well as societal factors that push individuals and groups towards radicalism. With reference to cyber security, implementation of measures is not fully completed according to the study findings. A flexible legislation to comply with European standards due to the dynamics of change in such field of security was also judged of importance from Mr. Qiriazi. Such lecture, for its relevance provoked a lot of discussions, with questions ranging from the probable causes of extremism, to the prospect of migrant waves in the future.

The informative and open discussion approach achieved to improve and enhance the target group knowledge on rule of law issues, the role and the contribution that various institutions, actors have in pushing forward the process, the actual progress achieved and help them in having realistic expectations.