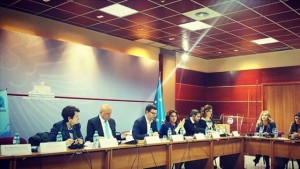 The European Movement in Albania (EMA) in partnership with Slovak Foreign Policy Association (SFPA),  with the support of the Ministry of Justice organized the 3rd and 4th sessions of the Working Group I addressing the topic: “Free Legal Aid and Information on Legal Issues”.

H.E. Mr. Ylli Manjani, Minister of Justice during his opening remarks emphasized the need for a reconception of the system, implicating that the Legal Aid should not be provided only in the courtrooms but the entire time, including the pre-trial assistance, legal information and primary consultation. Regarding the pre-trial service, a decision has been taken for the opening of the office in the premises of the Ministry of Justice. According to H. E. Mr. Manjani, one of the main problems of free legal aid is linked with the budget and the financing of this sector from the Albanian state. The judiciary system should generate sufficient income to cover the costs and fees of free legal aid. The Ministry of Justice in Abania has as priority the increase of citizens’ credibility about the work of the courts and civil society has an important roleas well,  which can contributing with his expertise and exploring other alternatives to offer regarding free legal aid process in Albania.

Mrs. Vjollca Meçaj, Co-chair of the Working Grup and President of Board of the Albanian Helsinki Committee, stated the neccessity to provide free legal Aid because of the high level of poverty of the Albanian citizens, reaching more than 30% of the population. Although free legal aid remains a primary task for the state and the Justice system, Mrs. Meçaj said that this service is offered more from the civil society organizations rather than the state. Based on this statement, she added that she disagrees with some points in Euralius’ Draft of Legal Aid- that the role of the civil society organizations is excluded in the framework of the provision of free legal aid. Justice system not only guarantees safety and order, but it also has a straight impact in the contract of the citizens with their state by serving as a moderator in the conflicts between the parties. Guaranteed free legal service to other vulnerable categories such as minors, asylum-seekers, abuse victimsrepresents a vital importance. Mrs. Meçajconcluding that by providing free legal aid, there will be a guarantee of freedom and the fundamental human rights.

During her speech Mrs. Blegina Agolli, Director of State Commission for Legal Aid (SCLA), emphasized the main problems encountered during the daily activity of the institution she directs. According to Mrs. Agolli the lack of a sufficient and efficient fund hampers the work and this is compounded when the number of the people who fulfill the criteria for assistance increases every year and the flux of applications is also increasing. Some of the positive initiatives undertaken by SCLA were listed as below: 1. The facilitation of bureaucracies and lengthy procedures whereas now the citizen fills in only one application. Moreover, the answer comes in a short and reasonable period of time. 2. The individual is excluded from the payment of extra taxes and fees for the judge. 3. The opening of 6 legal aid offices next to the Courts of Appeals in different regions of Albania. Another positive element during the Commission’s activity is the fact that, according to Mrs. Agolli, around 98% of the cases taken under consideration from the SCLA have been won. Therefore, according to her the problem is not the legal space or the process, but the insufficient budget, where based on the statistics given by Mrs. Agolli, the commission is given every year less funds.

The Slovak expert, Mr. Vladimir Kordos, made a presentation of his experiences as a lawyer offeringfree legal aid and explained in detail how the procedures in his country are implemented. The institution that offers legal aid in Slovakia is the Center for Legal Aid, along a budget determined by the state and offers free services to citizens in need, especially in cases and conflicts with a family character, in problems out of the border and also in asylum seeking issues. He listed that since 2011 there were 1000  cases of offering assistance, whereas in 2015 there were 6000 of them. According to Mr. Kordos, in Slovakia in line with the law,  there should be met first some conditions in order to receive free legal assistance, such as: economical inability or difficulty; chances to win should be high and the applicant should have facts to prove it; the value of the conflict should exceed that of the minimal wage in order to be taken under consideration from the center of legal aid in Slovakia. An important element mentionedwas about the preliminary consultations that are offered to individuals and this is actualized before the evaluating process if the conditions are met in order to offer free legal aid.

During the second panel of discussions with main focus Education and Information on Legal Issues of the public, a debate and discussion was finalized on the achievements of the state institutions to provide the necessary legal information for each individual and his access to opportunities. From the other side, representatives of the civil society emphasized the challenges in this framework.

Mrs. Ardita Buna, Director of the Official Publication Centre, offered a clear picture of how the Centre has evolved and transformed the process of publishing official acts and laws , being the most practical approach enabling the public access to information. The Official Journal  publishes laws, legal norms, including here decrees, normative acts of ministers and the decisions of the Constitutional Court. Mrs. Buna while evaluating the Official Journal and the Official Publications Centre as the first point of contact with the citizens stressed that there is still need of an online search system along with the digitalization of older acts. In her speech she mentioned the Bulletin for Public Announcements as a service and chance that is offered to the public free of charge. The access to legal norms remains an important element during the activity of their work.

Mr. Sokol Muça,Subgrant Coordinator of Save the Children Albania, expressed the engagement of civil society which, according to him, is contributing for an open and functional justice system for everybody. He explained further how the offered grants from the EU are utilized to serve this purpose, where, as stated by him, 2 are the main fields of funding with approximately 450 thousands€ each: the Supervision of Justice and the Access to Justice. The second field remains a priority according to Mr. Muça. He clarified that the amount of the grant changes, starting from the small (10-15 thousand € for less than a year, to the medium grants (40-50 thousand € for a duration of 1 and a half year to 2 years). He mentioned the work of the Coalition of Civil Society for Justice, where it is important to have cooperation and synergy for the continuance of further progress, without forgetting the Justice Reform.

Mr. Gerti Shella, Director of the Centre for Public Information Issues (INFOCIP), stated that from the aspect of the legal framework Albania there exists a “legislative pollution”. The Albanian state in the last 25 years has signed many National Conventions with a main focus in the rights of the individual, but the problem remains in the implementation of these laws. Regardless of this, Mr. Shella mentioned the fact that there are difficulties in accessing the information online, and in most of the cases it is not updated. Legal information is one of the necessary conditions in order to develop and coordinate the society, as the implementation of a law begins with its recognition and if this opportunity is not being offered to the citizens then it is difficult to ask from them to follow the law. Regarding the public service of delivering the law, it should be as easy as possible and appropriate for the public instead of hampering the process or, even worse, waste their time and efforts.