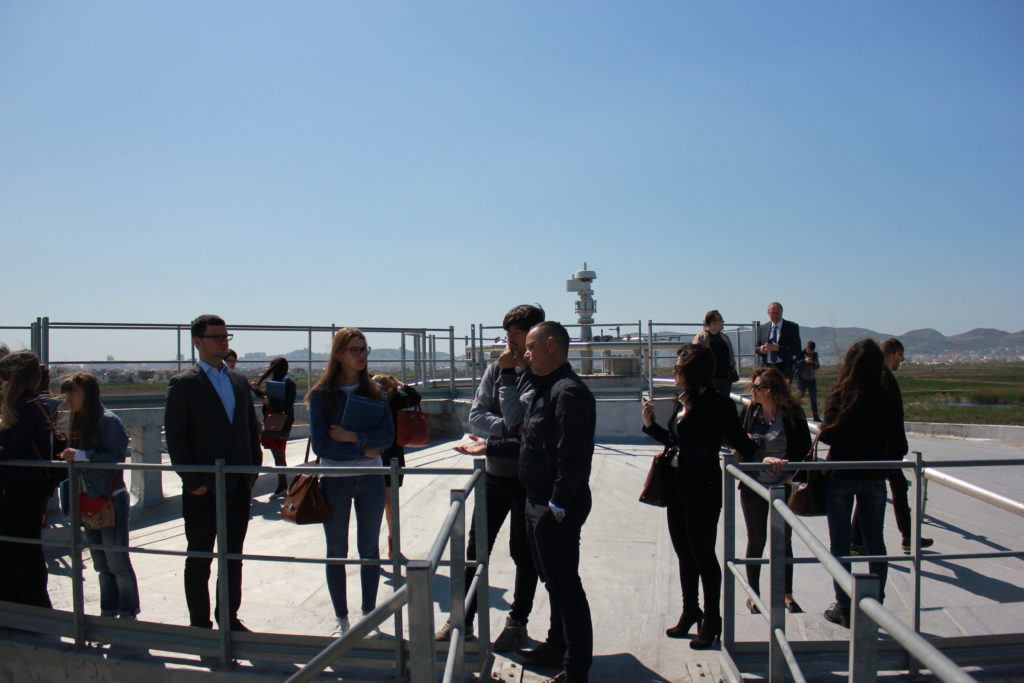 European Movement in Albania in partnership with the Embassy of Slovak Republic in Albania with the distinguished participation of the Deputy Head of Mission of Slovak Republic in Albania, Mr. Milan Selecký,  conducted on March 30th, 2017 in Durrës, a study visit followed by a discussion forum. This activity  organised in the framework of National Convention on EU Integration, was focused on “Environmental protection: Respecting EU standards regarding water and waste management process” and took place at the surroundings of Wastewater Treatment Plant in Durrës.

During his opening speech, Mr. Gledis Gjipali, Executive Director of European Movement in Albania thanked the Slovak Embassy, and the institution of the Wastewater Treatment Plant, for their cooperation and commitment to make possible the successful implementation of this initiative. On the other hand he emphasized that this activity is taking place in the framework of National Convention on European Integration, specifically under Chapter 27 (Environment), which is one of the chapters in the negotiating process on EU Integration. Mr. Gjipali emphasized the relevance this field has for everyday activities and quality of life for everyone and how important is for Albania to comply the environmental standards, fight against pollution and environmental protection by improving and implementing the legislation, increasing the capacity and awareness on the environment. He highlighted that the purpose of these activities is not just to inform the youngsters, but firstly to give them the opportunity to get engaged and involved throughout discussions and participating in decision-making forums.

Mr. Olsi Graceni, director of the Wastewater Treatment Plant in Durrës, made a brief presentation of the Plant, its functions and the innovations that it brought. The Plant, a project finalized in 2013 with the support of the World Bank and the European Union with about 70 hectares, it is one of the most modern plants in Albania, which has the highest standards in the wastewater treatment process and recycling. Mr. Graceni explained in details the whole process, starting from collection of water, its treatment, purification, analysis and transformation of contaminated water into water that can be used both for internal consumption within the plant, as well as for irrigation in agriculture.

Mr. Klodian Aliu, environmental expert during his discussion with the students and young people presented some interesting facts about the environmental situation in Albania, focused on the waste treatment process. According to him it is necessary to upgrade and update the Albanian legislation regarding the treatment of waste, due to the fact that today the most used techniques on managing the waste are dumping and burying, as well as burning of waste. According to him, there are more than 1 500 hotspots across the country, where people gather and throw waste. An important law according to Mr. Aliu is the one adopted in 2011 for the Integrated Waste Management, but according to him, there are some problems when it comes to the full implementation of this law. There are several types of waste that Albania cannot process like: Industrial waste, which Albania is forced to export it to Italy or Romania. Some strategic measures suggested by Mr. Aliu to be followed by the Albanian authorities include: 1) Reducing the production of waste as much as possible; 2) development and intensification of recycling; 3) the use of waste to produce energy; 4) giving up from landfills / burying procedure of waste.

Av. Holta Ymeri, expert of the Working Group IV presented the Aarhus Convention and three fundamental rights running from this Convention, while she explained how this Convention is implemented on the Albanian context. Three pillars of the Aarhus Convention include: 1)Public access to information about the environment; 2) Public participation in certain environmentally relevant decisions; 3) Access to courts of law / tribunals in environmental matters. To Mrs. Ymeri, Albania is a country that has ratified this Convention, implying that the Albanian authorities and the Albanian legislation should respect and implement it. She mentioned some of the laws that provide the respect of these three rights in Albania and materialised it to a real case occurred in our country.

After discussing, participants visited the facilities of the plant t where they were introduced more closely and specifically with the working procedure there. The meeting with chemists in laboratory tests who explained them more about the analysis process and about the assessment of chemical elements found in water, assisted the participants to have a clearer picture of the process.