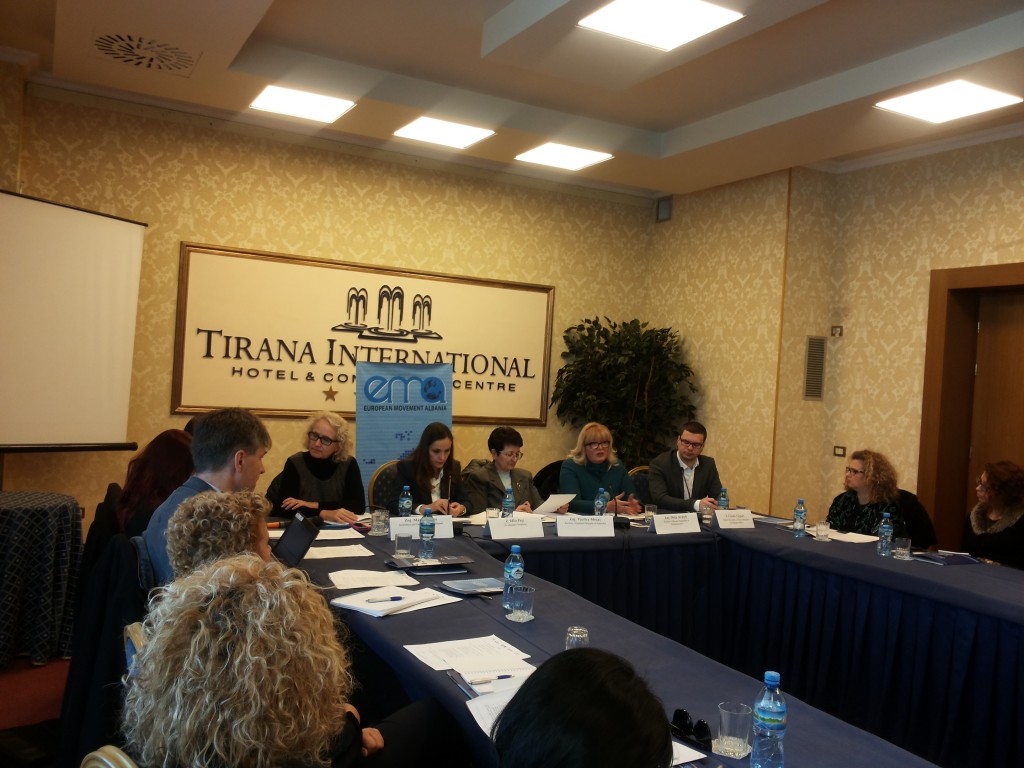 On 19 January 2016, European Movement in Albania (EMA) with the cooperation of Slovak Foreign Policy Association (SFPA) and the support of the Ministry of Justice and the Ministry of European Integration organised the Second Session of Working Group I addressing the topic: “Alternative Dispute Resolution”.

The introductory speech was conducted by the Executive Director of European Movement Albania, Mr. Gledis Gjipali, who explained the established mechanism of National Convention on EU Integration, as a connecting bridge between state institutions and civil society actors. Mediation is considered as an effective alternative in dispute resolution, which is in fully accordance with the requirements of Stabilisation Association Agreement, therefore it was assessed as relevant to be discussed in the second meeting of WG I. To Mr. Gjipali, the importance of the Working Groups relies in a set of recommendations and action platforms to be concluded regarding the mediation as a solution, as more efficient and simpler for the citizens as well as a standard that is required to be fulfilled towards the opening of negotiations. This process needs a higher level of transparency and comprehensive involvement, for a better understanding of mediation cases and an effective cooperation between interest groups, as well as the media.

Mrs. Tetis Lubonja, ‎Director of Integration and Projects Directory at Ministry of Justice emphasized the important role of the Ministry as supervisory and the main supportive institution during the mediation process and activities related. According to some evident facts, Mrs. Lubonja listed a number of problematic issues in judicial system such: an overwork of Albanian courts, a huge time gap between the court hearings of the same case, a high level of bureaucracy, the costs for the citizens and the low trust on the final decisions.For an efficient and transparent justice system in Albania, according to Mrs. Lubonja, it is necessary a better cooperation between the structures. She evaluated the progress of mediation service as positive, yet a further progress is needed in promoting this procedure to make it knowledgeable and a common procedure for the citizens. The representative of Ministry of Justice noted the importance of Twinning Project supported by EU with the aim to give the best practices in the region and to offer alternative solution regarding challenging situations in Albania.

The Session 2 of Working Group“Judiciary and Fundamental Rights” was moderated by Mrs. Vjollca Meçaj, which is the WG expert, as well as the Executive Director of Albanian Helsinki Committee. After she congratulated the role and progress of the sessions conducted by the Convention, she emphasized the necessity of mediation in the Albanian society, as an important step in relieving several problematic situations among the citizens. Mrs. Meçaj explained that such issues derive due to the fact that the Albanian citizen is unaccustomed with the democratic system and its mechanisms. She evaluated the contradictory situations in our society during the years as consequence of a corrupted political system in itself. To her, mediation is an early practice in Albanian society, in which the best example is the process of mediation in resolving the cases of revenge and blood feud. The mediation is essential not only in lightening up the high amount of work on judicial system, but also in helping the citizens by solving the problem quicker and cost less. Mrs. Meçaj mentioned the state institutions as really important stakeholder, which should help on mediation development and promotion of information about the process and its advantages, not leaving outside the public as the most interested actor.

Mrs. Drita Avdyli, Chairwoman of National Chamber of Mediators (NCM) talked about the positive outcomes of the institution in its two- year work. The mission of the Chamber is to provide new alternatives, more transparent and efficient to conclude the disputes, helping the judicial system to a better functioning and effectiveness. Mrs. Avdyli listed the main features a mediator has, such as the executive title he/she holds. In addition, she explained that the agreement reached by the mediator is binding and enforceable on the same scale with arbitrary decisions. At the meantime ,Mrs. Avdyli showed her concern about some individuals that are not registered in the NCM, yet they continue their activity as mediators. NCM has a solid and a wide legal framework including even the Ethic Code of 2015, NCM Statute and several DCM-s or bylaws. She added that in 2013 it was adopted the decision for the Manual of Service Tariffs, which offers a free service to all the people with financial issues. Based on the recent data, she showed that during 2014 there were 1 100 registered cases, 857 of which were resolved by using the mediation procedure. Regarding the first half of 2015, there were 282 successful cases. Concluding her presentation,Mrs. Avdyli emphasized the relevance of trainings and qualifications of mediators, by noting that some institutions like the British Embassy have given their assistance on training and qualifications process. She also invited all the mediators to register near the competent authorities for licensing their activity to provide a legal and qualitative service to the citizens.

Las but not least, Mrs. Marjo Naapi, the Resident Twinning Advisor in Albania informed the Working Group about the project’s progress and brought her expertise in the mediation field. The Finnish representative assessed the progress made in Albania and explained that she is currently working on preparing the curricula and informative materials necessary for the training courses for mediators. As part of the Twinning Project, she introduced its stages mentioning the Ministry of Justice and NCM as main beneficiaries. The project which was initialised on 5 October 2015 will continue for 18 months and it is planned to be concluded on April 2017, moreover it is composed of three main components:

The main goal of this component is the identification of gaps in Albanian current legislation and how to approximate it with the EU acquis. The promotion of Mediation as an essential procedure that can provide the free access of citizens into the judicial system. The harmonisation of all laws and Albanian codes such as: Civil Code or the Code of Family is also important. In addition the further progress of mediation is a requisite for the Justice Reform in itself.

A consolidated Mediation Chamber can be achieved if these important steps are followed:

-Consolidation of National Strategy Framework, in which the structure of Chamber is provided, and all the institutional framework is included under one umbrella. Until now the first session is accomplished, and the second one is anticipated to begin in April 2016

-Increase of monitoring and supervising capacity of NCM

-Establishing a database system to manage the dispute cases and their resolutions.

-Training of Trainers should be a NCM’s priority

-Training of other actors involved in the process, by enhancing the awareness and information. Media is crucial and an added value during all the procedure.

3.  Increase of the awareness regarding the inter-institutional cooperation and mediation

The informative  and awareness campaigns should be intensified to provide the relevant information about mediation. This will help as well as in the improvement of inter-institutional cooperation. Giving the appropriate information is required to make people understand that they have other choices when it comes in resolving contradictions or disputes. The main elements to be fulfilled for the third component are as followed:

During the session representative of state institutions discussed with interest groups, while in the end important recommendations derived regarding the topic of Alternative Dispute Resolution.